PDF Files Can Be Abused to Steal Windows Credentials 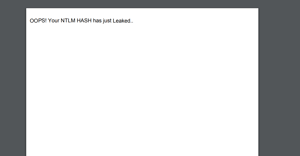 PDF files can be weaponized by malicious actors to steal Windows credentials (NTLM hashes) without any user interaction, and only by opening a file, according to Assaf Baharav, a security researcher with cyber-security Check Point.

This means an end user who opens a PDF attachment they did not ask for can be pnwed in about 15 seconds. Good thing this nasty is not in the wild just yet....

Baharav published research this week showing how a malicious actor could take advantage of features natively found in the PDF standard to steal NTLM hashes, the format in which Windows stores user credentials.

For his research, Baharav created a PDF document that would utilize these two PDF functions. When someone would open this file, the PDF document would automatically make a request to a remote malicious SMB server.

By design, all SMB requests also include the NTLM hash for authentication purposes. This NTLM hash would be recorded in the remote SMB server's log. Tools are available that can break this hash and recover the original password.

This type of attack is not new, at all, and in the past, has been executed by initiating SMB requests from inside Office documents, Outlook, browsers, Windows shortcut files, shared folders, and other Windows OS internal functions.

All PDF readers are most likely vulnerable

Now, Baharav has shown that PDF files are just as dangerous. The Check Point researcher told Bleeping Computer that he only field-tested the attack on Adobe Acrobat and FoxIT Reader.

"We chose to test these two high profile PDF readers," Baharav told us. "Regarding the others, we highly suspect they may be vulnerable as well."

"We followed a 90 days disclosure policy by notifying only Adobe and Foxit regarding the issues," Baharav says.

While FoxIT did not reply, Adobe said it doesn't plan to modify its software, deferring to Windows OS-level mitigations. Adobe engineers were referring to Microsoft Security Advisory ADV170014, released in October 2017.

Microsoft released ADV170014 to provide a technical mechanism and instructions on how users could disable NTLM SSO authentication on Windows operating systems, in the hopes of stopping the theft of NTLM hashes via SMB requests made to servers located outside the local network.